+Ken Theriot
Owner and operator of Home Brew Audio. Ken is a musician, voice-actor and by necessity, and audio engineer;).

Find more about me on:

Here are my most recent posts 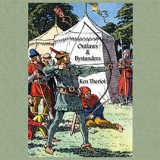 Hi everyone! Ken is was in the studio madly recording and producing the new album, called Outlaws and Bystanders, which was released March 12th of 2014. At the point I wrote this post (Feb 23rd, 2014), any and all possibilities of procrastination on our part had been eliminated, as the recordings and artwork were out of […] 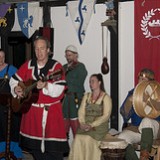 We need your advice! Ken will have a new album out – Outlaws and Bystanders – by Gulf Wars 2014. We promise this time! Ken had multiple surgeries last year (nothing life-threatening) that basically put him out-of-commission for an entire year. The album was planned for release before the 2013 Gulf Wars event when it […] 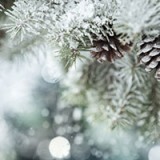 The Gifts of Midwinter is the title track to the Christmas album by Ken and Lisa Theriot. The song was written by Lisa Theriot. And as today is the Winter Solstice – or Midwinter Day, it’s the perfect day to write about this beautiful song. Faith, hope and love are the powerful gifts that the […] 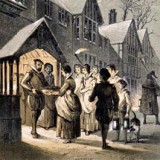 Drink to the Holly Berry is an original Christmas song about that age-old tradition of caroling and begging for booze, basically. Who doesn’t like a good wassailing song at this time of year? The song is from the Christmas album, The Gifts of Midwinter, by Ken and Lisa Theriot. Below are lyrics and notes on […]

Riu Riu Chiu appears on Ken and Lisa Theriot’s latest album, The Gifts of Midwinter. You can listen to the song below: Lisa Theriot says: “Ríu, ríu, chíu” is a very popular song, considering it dates from the 16th century and was only seemingly preserved in one copy. Add to that the fact that the […] 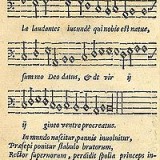 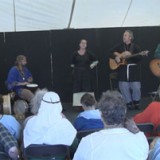 Gaudete is the 1st song on the Christmas album The Gifts of Midwinter by Ken and Lisa Theriot.  A lot of people ask “what does Gaudete mean?  Well, the word itself is Latin for “rejoice.”  The chorus, “Gaudete, gaudete! Christus est natus Ex Maria virgine, gaudete!” means “Rejoice, rejoice! Christ is born Of the Virgin […]

Yes, Ken Theriot’s upcoming album – Outlaws and Bystanders –  has been delayed several times – primarily (well, pretty much entirely) due to medical issues. But progress IS being made. Here is the status: The song “William Tell” is about 95% of the way to being final. The new lead vocal track just needs some […]

Lisa Theriot, who has written the lyrics for all the songs (save the one cover – Queen of Lilies, written by Sherry Kramer and Dave Thewliss) for Ken Theriot’s upcoming album, Outlaws and Bystanders, has been patiently waiting for Ken to finish the songs by composing the music. This has been their song-writing process for […]

Ken and Lisa just finished writing William Tell. Well, Lisa wrote the lyrics months ago. Ken spent the last few days composing, and the tete-a-tete that follows where they both tweak and haggle has just ended, heralding the completion of a new song. That means there are four songs remaining that have either no music […]