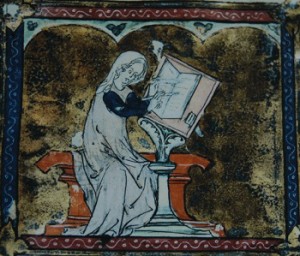 I have been writing poetry since I learned what a rhyme was. (I found out after I became an adult that my mother also wrote poetry throughout her life, though she NEVER shared it with us.  So maybe it’s genetic.) Somewhere I have a second-grade paper with a poem about a “pretty kitty” which I take out and read periodically to remind myself of where I started.  In High School, I seriously had people pay me to write their sonnets for them, because it came so easily to me.  Some of my poetry is very serious and scholarly, some is scurrilous in the extreme.  Most of it is fixed-form poetry, because I think free verse, or as I call it, PTF (prose typed funny), is an excuse for laziness. Poems which have been entered in competitions have a link to their documentation at the bottom, so people who are interested in the documentation can look at it, and the people who aren’t can enjoy the poetry without the lecture.

Aenigmata Diaboli et Responcio
A pair of macaronic poems in the style of “De Amico ad Amicam” and “Responcio” (ca. 1430).  The stanzas are written in alternating lines of late Middle French, late Middle English, and Latin.  It was entered in Kingdom A&S in spring of 2011 and was selected as a Gulf Wars entry.

Ballade des Pelicans
A ballade on the medieval legend of the pelican and her basic nature.  (We bleed to serve, but first we slaughter.) This poem was written for the fall event in the Barony of Bjornsborg, October 2007, where the theme was “the medieval bestiary”. It was entered in Kingdom A&S in spring of 2008 and was selected as a Gulf Wars entry.

Lament of Bovchiqvald
A poem in iambic pentameter of six-lined stanzas rhymed ababcc (known as the “Venus and Adonis stanza” after a work published by Shakespeare in 1593), about one of the marshals on the French side at the Battle of Agincourt (1415), Jean le Maingre dit Bouciquaut.  It was entered in Kingdom A&S in spring of 2009 and was selected as a Gulf Wars entry, and I was named Kingdom Artisan.

Silly Sonnets
Sonnets are rightly considered high art, but like most art, shouldn’t always need to take itself seriously.

Token Free Verse
Here is my only free verse poem I have bothered to write down. I wrote it while on a long drive home one evening after work in Los Angeles, watching the sun set bloody through the smog in my rear-view mirror while the stars came out in front of me.