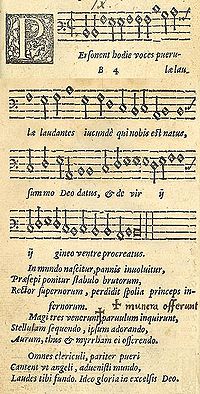 Here is the the entry from the liner notes (download here!) for the album, written by Lisa Theriot, followed by an audio player you can use to listen to the song – both on a regular computer or on your mobile device (yes, iPhones and iPads included;)):

This song is an unusual sacred-Latin-to-sacred-Latin “filk”
or contrafactum. The underlying song is a 12th century
hymn to Saint Nicholas (beginning, “Intonent hodie, voces
ecclesiae…”) which was at some point converted to this far
more popular song traditionally associated with the Feast
of the Holy Innocents.

Listen to the song here:

* This line was omitted by the printer of the 1582 edition;
it was added by hand at some point to the copy digitized by
the Finnish National Museum.