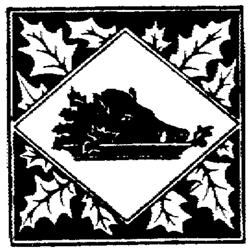 The Boar’s Head Carol is the 13th of 15 songs on the Christmas album The Gifts of Midwinter by Ken and Lisa Theriot.

From the liner notes of the album:

This carol always reminds me of a certain Drachenwald
feast where a boar’s head was served to the Prince and the
herald loudly declared “His Highness has the head of a pig!”

The Boar’s Head in hand bear I,

Bedecked with bays and rosemary;

And I pray you, my masters, be merry,

The Boar’s Head, as I understand,

Is the rarest dish in all the land,

Which thus bedecked with a gay garland

Our steward hath provided this

In honor of the King of Bliss,

Which on this day to be servèd is