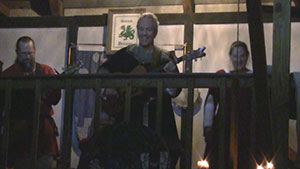 Ken Theriot performs “Soldier of God” live at The Green Dragon Tavern March 12th, 2014. The song is from his new album, “Outlaws and Bystanders.”

The Green Dragon Tavern is a wonderful live music venue built specially for the medieval-themed annual festival called Gulf Wars, an event of the Society For Creative Anachronism (SCA). It was a perfect place for the release concert for the new album.