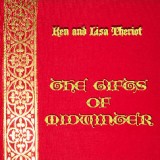 We’ve told you that it’s now available, and you’ve seen (and hopefully heard samples of) the songs that are on The Gifts of Midwinter, the new CD by Ken and Lisa Theriot.  But other than that you may not know much about it.  So we thought publishing the liner notes as a blog post would be a great way to tell everyone about it.  Lisa did a great job summarizing the project, as well as printing the lyrics and her translations of the non-English songs.  If you’d like to download that as a separate document, you can do that by clicking here: The Gifts of Midwinter Liner Notes.

Here is Part 1.  We’re going to serialize this due to its length.

Since then we have set out to find songs you don’t hear on EVERY Christmas album, though we couldn’t resist putting our stamp on a couple of personal favorites.  So here they are, from the sacred to the secular, from medieval to modern.  Good Yule and Merry Christmas.

Note: all italicized editor’s notes are by me, Lisa Theriot.  All translations are my own (I have trust issues!).

I once heard a fighter say that he had been really inspired before a battle because the army was singing together in Latin.  Horribly, they were singing this song, the chorus of which translates as “Rejoice, for Christ is born of the Virgin Mary!”  I’m a little alarmed that they headed off to shed metaphorical blood singing this song, but I suppose it’s quite the medieval attitude.  There is no music for the verses in the Piae Cantiones; the verse melody is usually given as from the Bohemian collection referenced above; however, since I have seen at least three different verse melodies all claim the same source, I remain in doubt until the Czech National Library sees fit to web the collection.

“Marmion” is an epic poem by Sir Walter Scott set around the time of the Battle of Flodden Field (1513).  In the middle, there is a totally unrelated description of a jolly Christmas party.  I moved a few bits around and decided that it goes well with the melody from “The Sussex Carol,” which begins, “On Christmas Night all Christians sing…”

Then opens wide the Baron’s hall
To vassal, tenant, serf, and all;
Power lays his rod aside,
And Ceremony doffs his pride.
And to the cottage, as the crown,
Comes good news of salvation down.

The fire, with well-dried logs supplied,
Goes roaring up the chimney wide:
The wassail round, in good brown bowls,
Bedecked with ribbons, blithely trowls.
So mix sobriety with wine,
And good cheer with thoughts divine

Then come the merry maskers in,
And carols roar with blithesome din;
If unmelodious the song,
It is a hearty note, and strong.
Listen, and in their mumming see
Traces of ancient mystery.

And so to merry England then
Old Christmas brings his sport again.
At Christmas broach the mightiest ale;
At Christmas tell the merriest tale;
Let chill winds whistle as they will,
We’ll keep our Christmas merry still.

Words by Sir Walter Scott
From the introduction to Canto VI of “Marmion,”
Dedicated to Richard Heber, Esquire,
and set at “Mertoun House, Christmas.”
Music, traditional, to “The Sussex Carol,” melody
collected from tradition in 1919 by R.V. Williams
(the original lyric for the Sussex Carol was published in Ghent in 1684 in a collection called “Small Garland of
Pious and Godly Songs.”)

The original French is far superior to the English translation of “O Holy Night.”   The English version fails to capture the emotional transition of the Midnight (Minuit) Mass from awestruck to joyous.  The first chorus asks the people to kneel in homage, but the second tells them to stand up and sing for joy at their salvation.
Minuit, Chrétiens, c’est l’heure solennelle,
Où l’Homme-Dieu descendit jusqu’à nous
Pour effacer la tache originelle
Et de Son Père arrêter le courroux.
Le monde entier tressaille d’espérance
En cette nuit qui lui donne un Sauveur.
Peuple à genoux, attends ta délivrance.
Noël, Noël, voici le Rédempteur,
Noël, Noël, voici le Rédempteur!
Le Rédempteur a brisé toute entrave:
La terre est libre, et le ciel est ouvert.
Il voit un frère où n’était qu’un esclave,
L’amour unit ceux qu’enchaînait le fer.
Qui Lui dira notre reconnaissance,
C’est pour nous tous qu’Il naît, qu’Il souffre et meurt.
Peuple debout! Chante ta délivrance,
Noël, Noël, chantons le Rédempteur,
Noël, Noël, chantons le Rédempteur!
Words by Placide Cappeau (1808-1877)
Music by Adolphe Adam (1803-1856)
Arranged by Lisa Theriot
© 2010, Raven Boy Music
And if your French isn’t what it should be…
Midnight, Christians, it is the solemn hour
That God-made-man descended among us
To erase original sin
And of His Father end the wrath
The whole world trembles with hope
In this night which gives us a savior
People on your knees, await your deliverance
Noël, Noël, here is your Redeemer
Noël, Noël, here is your Redeemer
The Redeemer has broken our bonds
The earth is free, and Heaven is open
One now sees a brother where there was a slave
Love unites those once bound in chains of iron
Who will tell him of our gratitude
It is for us all that he was born, that he suffered and died
People, arise!  Sing of your deliverance!
Noël, Noël, sing of your Redeemer
Noël, Noël, sing of your Redeemer
Do You Hear What I Hear?
This is a favorite of mine and of several close friends, so as much as we tried to avoid modern Christmas songs, we had to make an exception for this one.  Ken was happier about it when I told him what I wanted for the drums…
Editor’s note: We don’t have permission to post the lyrics here as this song is still under active copyright.
Words and music by Noel Regney and Gloria Shayne
© 1962 Jewel Music Publishing Co.
All rights reserved
Arrangement by Ken and Lisa Theriot
©2010 Raven Boy Music