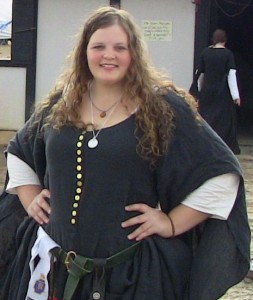 Samantha Moore, known in the SCA as HL Ambra Michelli, will be playing live at The Green Dragon tavern, 7-8 pm on March 15th, 2011.  This is Tuesday night of Gulf Wars XX.

Ambra is known for her powerful voice, unique and wonderful performances of classic SCA songs…especially the “war songs,” and her song-writing, having contributed several of her own songs to the SCA bardic songbook, including Who Serve The Soldiers, Glory Reaped, and I Am Able. Clips of her songs can be heard here: https://www.cdbaby.com/Artist/SamanthaMoore

She has released two albums with Raven Boy Music, Songs From The White Hart and Iron Hart.

Of her last album, Iron Hart, was left this comment/review at her CD Baby page:

author: Greg Korns
I recently purchased this CD at an event and it immediately became a daily listener. The music is a great mix of older SCA war songs and powerful original music. I loved the first CD and was proud to add the second to my Ipod play list along side Loreena Mckennitt, Blackmore’s Night, and Mary Black.

Come on out to the Green Dragon on Tuesday, March 15th at Gulf Wars XX for the show.  It will rock.