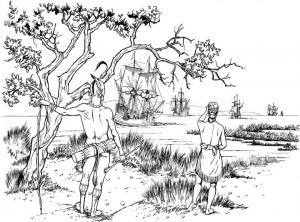 One of the most fascinating historical mysteries in the what is now The United States is the affair of the lost colony of Roanoke.  any number of papers and books have been written about the events surrounding the eventual disappearance of 116 men women and children from their brief settlement on Roanoke Island in what is now The Outer Banks of North Carolina.

After visiting the site and reading dozens of histories and theories, Ken Theriot came across a book called Roanoke: Solving The Mystery of The Lost Colony by Lee Miller and decided it was time to finally write the song called Fifty Miles Into The Main.  He and Lisa Theriot co-wrote the song that appeared on the album Human History.

Lee Miller has some unique perspectives to bring to the table on the matter, since she is an anthropologist and very familiar with Algonquin languages.  The book is at once scholarly and science (starting with what actual evidence exists…on both sides of the Atlantic) and murder thriller.  When all the data are laid out on the table, a few likely scenarios suggest themselves, and they are NOT in keeping with most of the popular theories of the past 400 years.

Here is the entry for the song in the liner notes for Human History, including the lyrics:

Fifty Miles into the Main

The “lost colony” of Roanoke is a mystery still being argued over, though John White, the expedition’s leader wasn’t really surprised to find his people gone on his return.  Since they were never meant to land on Roanoke at all, White told the colonists that if they had any trouble, they should journey fifty miles into the mainland where the natives were friendlier and the land was better.

One hundred mortal souls are we
Who fly from fear and strife
Denied our chosen destiny
New world, new land, new life
Facing murder or starvation
We must somehow refuge gain
And we pray we find salvation
Fifty miles into the main.

My name is William Waters
And I come from Plymouth town
At Walter Raleigh’s just command
We sail for Queen and Crown
In Virginia we would settle
English lands to challenge Spain
But we’ll have to prove our mettle
Fifty miles into the main.

In fifteen-eighty-seven
We set sail for Chesapeake
To found an English colony
And fortunes for to seek
After ten weeks of disaster
Mere ill luck could not explain
We were forced to look for shelter
Fifty miles into the main.

A seasoned pilot steers us wrong
And cannot find his way;
Was he ashore in Spain too long
And bought for traitor’s pay?
John White feared the foes of Raleigh
Might subvert our whole campaign
Cursing politics and folly
Fifty miles into the main.

On Roanoke we light unplanned,
Too late to till or sow
George Howe is dead by unknown hand
And stores are running low
Friendly Croatoan allies
Cannot spare us meat or grain
So our only hope of help lies
Fifty miles into the main.

By God or mortal men betrayed,
Our need at least was clear
John White agreed to go for aid
And said for all to hear,
“Travel up the Chowan River
Where the land can life sustain;
May the Lord your souls deliver
Fifty miles into the main.”

Virginia Dare is six weeks old;
Not all are fit to roam
A few will beg a closer hold,
A Croatoan home
They have carved their destination
In a tree to make it plain
But most flee in desperation
Fifty miles into the main.

One hundred mortal souls are we
Who fly from fear and strife
Still seeking for our destiny:
New world, new land, new life
Plagued by savage hand or Spaniard,
All our hopes may be in vain
But we’ll follow promise westward
Fifty miles into the main.

words and music by Ken and Lisa Theriot