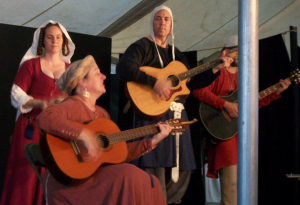 Ken and Lisa Theriot (Kenneth MacQuarrie and Adelaide de Beaumont in the SCA) will be performing live at the Pennsic performing Arts Pavilion, Tuesday August 9th 2011 from 6:30-7:30 pm during Pennsic War 40.  Come join the music and revelry as Kenneth and Adelaide and the rest of “the band” (Michele de Buzbee & Grimolfr Einarsson) fill the evening with their SCA hits such as Agincourt, Band of Brothers, The Feast Song, The Harvest, The Tabard Inn, Seek The Reaper and many more.  Plus, a few songs from their new CD, “The Gifts of Midwinter,” will also make their Pennsic debut.

Copies of their CDs will also be available throughout the evening.

That’s Tuesday night at Pennsic, at the Performin Arts Pavilion, at 6:30.  See you there!