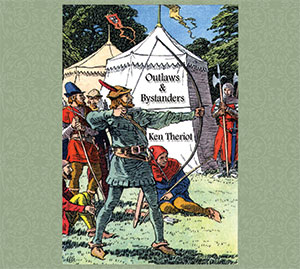 Ken Theriot’s new album – “Outlaws and Bystanders” – was released at the concert held on Wednesday, March 12th at The Green Dragon Tavern during Gulf Wars 2014 (an event of the SCA). Ken and Lisa Theriot were joined by their stalwart band-mates, Kevin Valiquette and Michele Buzbee, as well as Robert Ferrell on percussion.

They played to a packed house and debuted 10 of the 12 new songs on the new album, as well as mixing in 6 or 7 of the old favorites such as “Agincourt,” “Band of Brothers,” “Son of The Sea” and “The Feast Song.” Lisa Theriot also performed a new song of her own (to be available on her as-yet-unnamed next album) called “Tomorrow” (about Sheherazade of the One Thousand and One Nights fame). The new songs were all well-received, with a few, namely “Soldier of God,” “Lament of the Combat Archer,” and “William Tell,” turning up in conversations over the next days as “favorites.”

Where Can We Get The Album?

You can get the album on iTunes (along with Amazon, Spotify and most every other digital retailer).

You can also get downloads AND the physical CD at CD Baby:

You can download a PDF file of all the lyrics, along with information about each song, here.